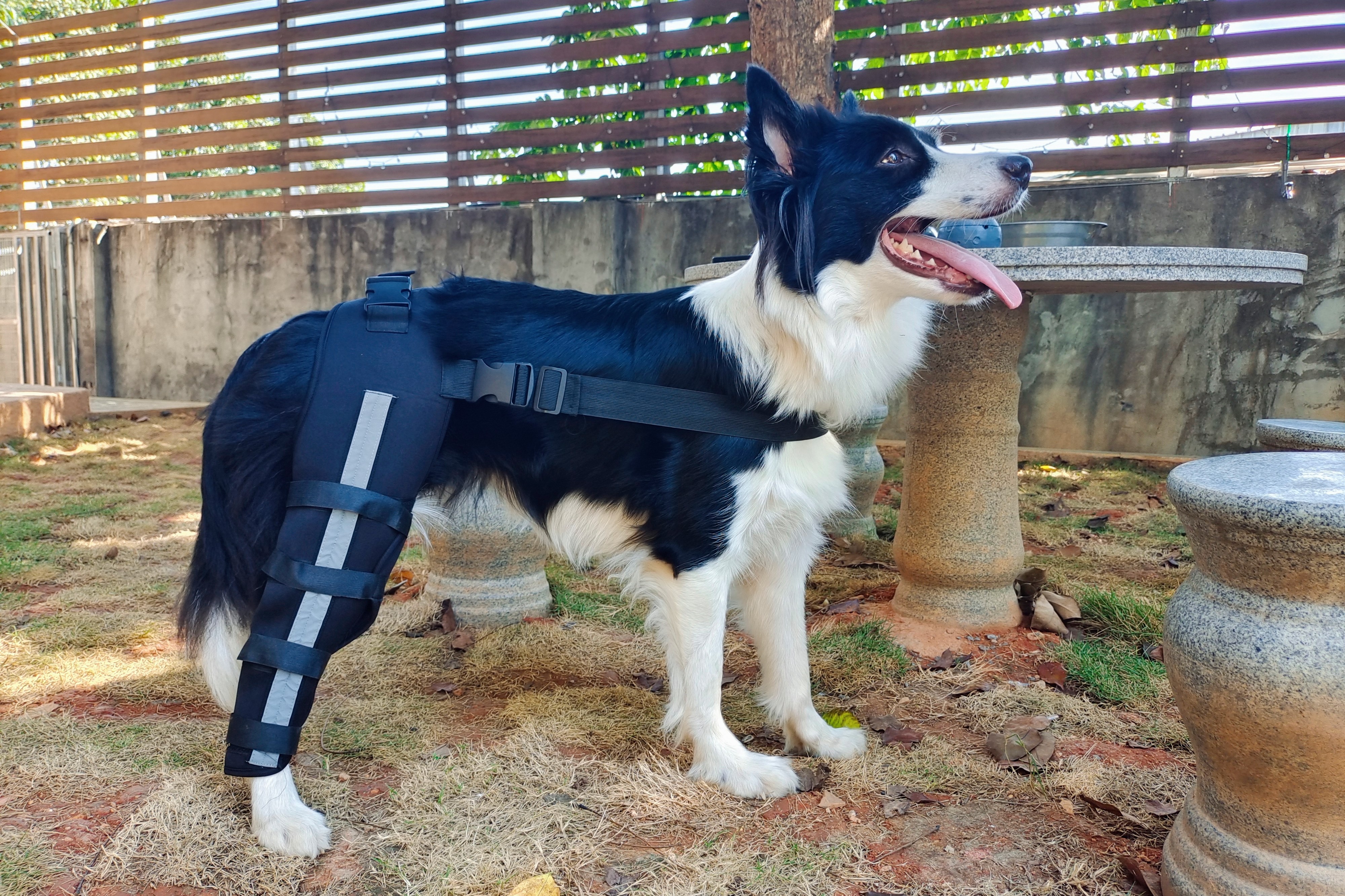 One of the most common injuries experienced by dogs is an injury to their knee, making it the leading cause for orthopedic surgery in canines. Out of all the possible knee injuries in dogs, Cranial Cruciate Ligament (CCL) injuries are the most common cause of hind end lameness in canines. Additionally, there is a 70% chance of injury to the contralateral leg, and about 40% of dogs with Luxating Patella experienced concurrent cruciate rupture. Dog knee braces are an alternative to support the healing of a CCL injury or to prevent further damage pre- and post-operative.

The CCL connects the dog’s tibia to its femur using connective tissue to stabilize the knee (similar to an Anterior Cruciate Ligament (ACL) found in humans).

Pain and discomfort are expressed differently in people compared to dogs, so although dogs may not whine, cry out, or hold up their affected limb constantly, the persistence of their lameness is pain.

Osteotomy techniques require a bone cut (osteotomy) which changes the way the quadriceps muscles act on the top of the shin bone (tibial plateau). Stability of the stifle joint is achieved without replacing the CCL itself but rather by changing the biomechanics of the knee joint. This can be accomplished by either advancing the attachment of the muscle (tibial tuberosity advancement or TTA) or by rotation the plateau (slope) of the shin bone (tibial plateau leveling osteotomy or TPLO). Many surgeons prefer these techniques for large, active dogs, and at CSU we generally prefer the TPLO technique.

Tibial plateau leveling osteotomy (TPLO) involves making a circular cut in the tibial plateau and rotating the contact surface of this bone until it attains a relatively level orientation that puts it at approximately 90 degrees to the attachment of the quadriceps muscles (see Figure 2). This orientation of the tibial plateau renders the knee relatively stable, independent of the CCL. The cut in the bone needs to be stabilized by the use of a bridging bone plate and screws. Once the bone has healed, the bone plate and screws are not needed, but are seldom removed unless there is an associated problem. The greatest advantage of this technique is the perceived superior outcome (limb function and less progression of arthritis) compared to traditional suture techniques especially in young, large breed dogs. The major disadvantage is the need to perform an osteotomy. Any osteotomy requires healing of the bone and if a problem is observed (such as implant failure, failure of the bone to heal), it may require multiple revision surgeries and the outcome may be poor. Luckily, such complications are rare, especially when the procedure is performed by an experienced surgeon

Tibial tuberosity advancement (TTA) requires a linear cut along the front of the shin bone. The front of the tibia, called the “tibial tuberosity” is advanced forward until the attachment of the quadriceps is oriented approximately 90 degrees to the tibial plateau (notice that this is simply another way to accomplish the same orientation as the TPLO). Again, this orientation renders the knee stable, independent of the CCL. Similar to the TPLO, the cut in the bone is stabilized by the use of a specifically designed bridging bone plate and screws. The decision between TPLO and TTA is based upon concurrent problems, surgeon preference, etc. The anatomic configuration of some dog’s knees does not lend them to safe or effective application of this technique.

A custom stifle orthoses or knee brace supports a dog’s knee joint to help keep your dog active as their stifle joint heals. A knee brace works by stabilizing a dog’s femur and tibia bones and minimize the stress placed on the cruciate (CCL).

A knee brace can be worn for additional support after surgery or in some cases as an alternative to surgery. Wearing a knee brace helps reduce a dog’s knee pain, along with inflammation. Once the knee is supported, the dog will find it easier to place equal pressure on both hind limbs so they are not placing too much stress on the healthy hind limb.